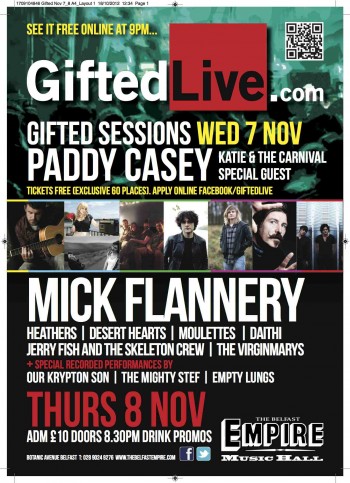 Get closer to the bands you love, without leaving your house.

GiftedLive.com are bringing you closer to the bands you love, without you having to leave the comfort of your home. It is a new ‘online music show’ set in a format similar to a TV show which is broadcasted live and direct from stunning venues: The Belfast Empire Music Hall and Monroes Live, Galway.

It’s the first music show of its kind – an online show based around a live gig. GiftedLive.com will feature the best new music around – from the established stars to the undiscovered gems – and gift it live to the world!

All GiftedLive.com shows are streamed for Free – Live & Online. And if you’re worried that you’re missing out on the adrenaline-fuelled impact of a live gig; that feeling will vanish once you watch your favourite band live – in real time – on your very own front of house seat, from your own home, lap top or mobile device. GiftedLive.com offers you the chance to share the ‘live gig experience’ …but with all the creature comforts of home!

Remember, you can always come and witness the magic in person. It is a live gig after all! And it is spectacular!!

Gifted Live has two resident hosts – Phily Taggart (BBC Radio 1) and Paul Walsh (Royseven). Each performance is filmed on multi-cameras and cut live on location. All performances are archived and available for viewing on www.GiftedLive.com

‘Gifted’ has been running at The Empire Music Hall for over 11 years and has showcased some of the finest talent to ever emerge from these shores. Everyone from Duke Special to The Answer, Therapy?, Two Door Cinema Club, Fighting with Wire, General Fiasco, The Riptide Movement, Desert Hearts, Olympic Lifts, Oppenheimer, David Kitt, Paddy Casey; the list reads like a who’s who of Irish music.