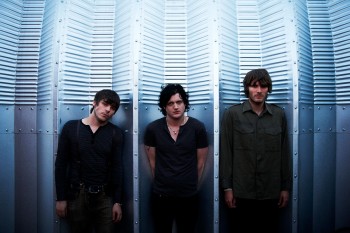 Ever wondered ĹWHERE HAVE ALL THE REAL ROCK N ROLL BANDS GONE?ĺ

Rising from a soundtrack of British music such as the The Who, Oasis, Sex Pistols, John Lennon and Joy Division is a new fuel for the fire.

Fierce, fresh and utterly unique Manchester powerful trio THE VIRGINMARYS are the band to put hook driven guitar music back in your life.

Their confirmed appearance on this yearĺs Isle Of Wight festival is a clear indication that the worldĺs biggest stages eagerly await them.

Their inclusion as a 2012 HMV Next Big Thing headliner was a reward for the band’s dedication to playing live, having already spent two years solidly touring the UK and Europe with the likes of Slash, Skunk Anansie and Ash, alongside acclaimed festival appearances at Download, Sonisphere, Splendour and Kendal Calling.

With the platform in place the band embarked on recording their eagerly anticipated debut album.

ĹKing Of Conflictĺ was recorded in just three weeks under the guidance of producer Toby Jepson and then mixed by Chris Sheldon (Foo Fighters, Biffy Clyro, Radiohead) who turned their engaging, honest and heartfelt songs into a succession of huge sounding, anthemic, rock n roll moments.

After album taster ĹPortrait Of Redĺ was a featured ĹRecord Of The Dayĺ track, the industry focus on the undoubted global potential of the band became ever more intense.

A worldwide deal was soon inked with Cooking Vinylĺs brand new rock label DoubleCross making The Virginmarys their debut and much talked about signing.

This music needs to be listened to intently and loudly.
Lyrically passionate, intense and punchy, the grooves will not be beaten from ĹKing Of Conflictĺ, a truly masterful debut album.

Must see gigs will be announced shortly as THE VIRGINMARYS take the world by storm !!!