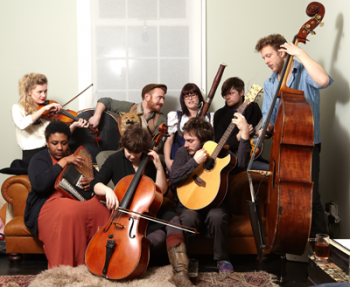 Moulettes are an alt.folk-rock band from the southern and western counties of this fair isle. They have been together since their mid-teens, earlier this century, and have just released their second album.
Ex-MouletteTed Dwane, now of Mumford & Sons recently returned to the fold to help record this new collection, The Bear’s Revenge , and earlier this year they played several dates with the Mumford boys.
Seasick Steve has used violinist Georgina on his latest album and live shows (alongside John Paul Jones of Led Zep); bassoonist, Ruth Skipper has recorded with Paul Heaton; and cellist Hannah has just contributed to a new album helmed by Adrian McNally of The Unthanks.
Moulettes’ charismatic, idiosyncratic brand of modern folk music – which incorporates elements of prog and alt.rock, pop and Classical– has bewitched crowds at many festivals, including Glastonbury, Bestival, Larmer Tree and Latitude where they played the BBC’s Late Junction stage.
The album has been garnering airplay from several legends of British broadcasting including Bob Harris of Old Grey Whistle Test fame, Lauren Laverne and Cerys Matthews. And has received several very good reviews indeed.
“Moulettes are among the frontrunners of the new British acoustic scene thanks to their sophisticated, unpredictable approach, matching exquisite female harmony vocals against complex, swirling backing featuring violin, cello and bassoon… adventurous, charming…edgy as well as upbeat.” **** Robin Denselow, The Guardian
MOJO magazine described their debut album as – “Complex and beautiful…intriguing and unique…” The Independent said “The best music I saw at Latitude was by Moulettes…” While The Times reckoned that “Florence Welch [Florence & The Machine] would have made this sort of music if she were a bearded lady…”. We take that as a compliment.