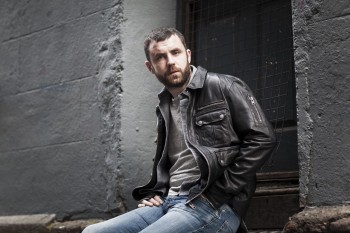 Itĺs mid February 2012, and Mick Flannery is in the BBC Studios in Belfast, recording an acoustic session, ahead of his debut Belfast gig. The new album is done and dusted, and Mick is taking time to reflect on the journey from the release of his sophomore album, ĹWhite Liesĺ, to where he is today.

After the release of ĹWhite Liesĺ, Mick and band toured Ireland extensively for what, Mick openly admits, may have been too long a period. ôThe songwriting suffered and lacked originality because of lack of time offö. When Mick did finally get off the road, he went in to studio in Killarney, with Tony O’Flaherty, but with so few songs to work with, only ĹGone Foreverĺ lasted to make the album.

Mick and band decamped to Wexford in January 2010, to Purple Crow studios, where they recorded day and night. ôA good deal of the songs were written here while staying in the house come studio ran by Donal Byrneö say Mick. ôBassist Brian Hassett, guitarist Hugh Dillon, violinist Karen O’Doherty, singer Yvonne Daly and drummer Christian Best were all influential in the arrangement and styling of the songsö. From these sessions came ĹHeartless Manĺ, ĹShips in the Nightĺ, ĹLead Me On, Up On That Hillĺ, ĹNasty Weatherĺ, ĹIf I Go Onĺ, and ĹGet That Goldĺ. At this point there were close to thirty songs in all but still no sign of a finished album.

In between recording sessions and live shows, Mick made two trips to the America. The first was to Boston, in late 2010, where he stayed with Declan Lucey and Dave Farrell, from the band Rubyhorse. There he wrote two of the songs that made the album, ĹNo Way To Liveĺ and ĹBostonĺ. Having seen the benefits of getting away for a while, he made another trip to America in 2011, this time to Nashville, where he wrote ĹKeepinĺ Scoreĺ and finished title track, ĹRed to Blueĺ, which he initially started in Boston, with the help of Declan Lucey.

By this time Mick was feeling the pressure, mostly from himself, to release another album. He returned to Cork, where he, again, teamed up with Christian Best, who, Mick says, was key to bringing this album to fruition. With his work ethic and production/engineering ability, the new songs were recorded and the old songs improved at Monique studios.

Recording finished in late November 2011 with the help of C.S.L. Parker and the Vanbrugh string quartet, and also the help of a brass section led by Paul Dunlea.

The songs now in the can, the files were sent to Ryan Freeland to mix and master. Freeland has, in the past, worked with Ray LaMontagne, Aimee Mann, Joe Henry, Grant-Lee Phillips, Son Volt, Jim White, and Loudon Wainwright III, among others.

Session at the BBC completed, itĺs off to another soundcheck, for another show. Itĺs only the beginning for ĹRed To Blueĺ

Red to Blueĺ was released on March 30th 2102. On April 6th, it entered the Irish Album Chart at #1, and stayed there for 3 weeks. Itĺs now been in the Top 5 in Ireland for 7 weeks. Mickĺs subsequent Irish tour was a 100% sell-out. UK dates are planned for June, and thereĺs keen interest from some International artists for Mick to open for them in Europe later this year. Mickĺs song ĹUp On That Hillĺ has been recorded by Shawn Colvin, for her new album, due out in June. ĹRed To Blueĺ is set for release in Germany in late Autumn, and a full tour of Germany, Switzerland and Austria in currently being planned.

Itĺs all looking good for a humble stonemason from Cork.

For more information, contact Pete Murphy or Jacqueline Lacy at EMI Ireland on
00353-1-2039900
or at pete.murphy@emimusic.com or jacqueline.lacy@emimusic.com