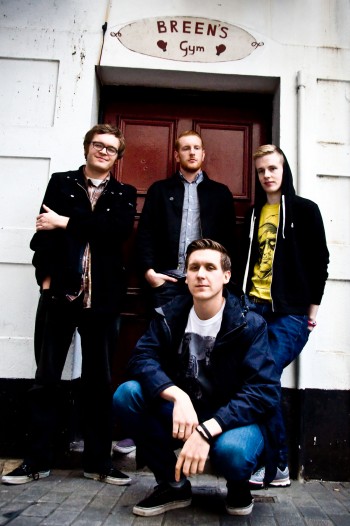 EMPTY LUNGS BIO:
Empty Lungs are a 4 piece based in Belfast, N. Ireland consisting of Kev Jones(lead vocal, guitar), Ryan
Holmes(bass, vocal), Sam Chadwick(guitar, vocal).
They played their first show in May 2011 they play passionate, anthemic and catchy music that draws
influence from punk, folk, country and post-hardcore.
The bands relentlessly energetic live shows have gained them a reputation as a must see act and within
a few months of playing shows around Ireland they had already received attention from local media and
received airplay on BBC Radio 1, Radio Ulster and countless podcasts.
Their debut single ”Identity Lost” was mixed by Rocky O’ Reilly (Opppenheimer, And so I watch you
from afar) and was released on 20th September 2011.
2012 has seen Empty Lungs enter the studio to record a 6 track EP that they’re currently planning a
release for, gain a 4th member in the shape of second guitarist Sam Chadwick and play a host of shows
including a full UK tour, supports with the likes of The Subways, General Fiasco, Cheap Girls, Lemuria,
Franz Nicolay(The Hold Steady), Japandroids, Dead To Me and a appearance at one of the biggest
independant festivals in Ireland Glasgowbury.
PRESS:
‘’ This Belfast trio’s debut triple-tracker will be catnip for anyone who worships at the altar of Hot Water
Music, Jawbreaker and their Eighties and Nineties US punk brethren…It’s all remarkably accomplished
for a first release, but then Kev Jones and Ryan Holmes have paid their dues in various bands over the
last five to 10 years – and it shows…this is an impressive opening salvo.’’- Chris Jones, AU Magazine.
”…The boys are in world beating form, they belt out the likes of ”Identity Lost” and ”Nothing Left To
Lose” with a belief and passion that marks them out as one of the best unsigned acts on the island right
now.” – Edwin McFee, Hot Press Magazine.
‘’Empty Lungs are like a cross between our own Runnin’ Riot and New Jersey legends The Bouncing
Souls, with an added pinch of Ted Leo clean guitar goodness. That, my friends, is no bad thing at all.’’
‘’…I can now heartily recommend the band as a potent power trio with a rapidly expanding set of catchy
yet crunchy tuneage. Empty Lungs Rock…’’ -David Roy, The Irish News.
‘’There’s a refreshing lack of pretence, the band managing to rise above the sometimes ‘whiney’ nature
of this genre by steadfastly refusing to sing in an American accent… There’s a convincing racket
delivered by the three piece, melodic and competently played. Some of the local buzz bands could
definitely learn from Empty Lungs’ example…’’ – Shane Horan, BBC ATL.
‘’ Identity Lost” is a powerful piece of alternate-punk that exhibits an intelligence and musical virtuosity
beyond what you would expect from the genre. Definitely a band worth watching …’’
-metaphoricalboat.blogspot.com.
‘’The band’s sound carries echoes of 80’s style American hardcore with traces of The Replacements
and Hüsker Dü very evident in their songs. However, they thankfully don’t have any glossy 80’s veneer
running over them, but instead have an aggressive and a lyrical realism and sincerity that carries
through the vocals and to the whole feel of the band as well. You know they mean every last note they
play; the drums hit hard and tight and the basslines are syrup thick and just as sweet. By the time
they’re on their second track, Stand Up, I want to be down the front singing along with them. Everyone
in the room are seemingly aware that they are seeing one of the best new acts around as people turn to
me and ask again for the band’s name, just so they remember it to look them up later. I suggest you do
the same; they could be your new favourite band.’’ -Allgonepop.com
www.emptylungs.com
www.facebook.com/emptylungs
www.emptylungs.bandcamp.com