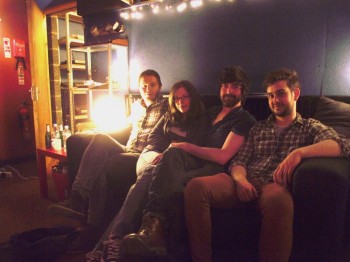 You never quite know whats going to happen at a Desert Hearts show. That’s the point really. As Charlie steps into the darkness at the front of the stage the crowd wince as half his boot hangs over the edge. But just as it looks like it’s going to all come crashing down it rises up instead. The searing guitars and mammoth drums somehow come together, stepping away from the brink, to create the sound of one of the most respected bands Belfast has.
The Desert Hearts have always been Charlie (Mooney, Guitar & Vocals) and Roisin (Stewart, Bass) but now they’ve found new energy in Stephen Leacock (drums) and Stuart Bell (Guitars).

Enturbulation=No Challenge will be out in late 2012 through No Dancing / Third Bar. For more information please just ask.