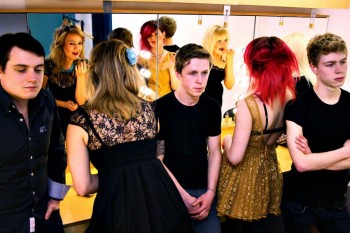 Silhouette is the perfect enigmatic alias of a passionate Northern Irish alternative whose main focus creatively is to inspire, touch and mend the hearts of anyone who is drawn in to listen.

Silhouette was created by Shauna Tohill in early 2008 after the break-up of her previous band, Angelfall. After great experiences in various bands, Shauna felt it was time to do something which she had always wanted to do…create music that broke down boundaries of traditional line-ups providing a raw, honest and truthful edge, hopefully offering some kind of accessible and therapeutic effect! – whilst continuing to place emphasis on the music as opposed to the creator.

Shauna has sessioned with various local and international bands throughout her time as a musician. Most recently she moonlighted as Snow Patrol’s guest vocalist on their entire European and Irish tour singing 3 songs! Shauna’s song ‘Can’t Keep Up’ is also this years sound of Northern Ireland as featured on all of the 2012 NITB advertisements.

Shauna recently joined Snow Patrol as a Guest Vocalist on their last European tour
singing some of their top hits including Set the Fire to the Third Bar which you can view
on Youtube!! She joined them at the MTV EMA’s in Belfast in November 2011 and at
the Q Awards in London just before that!

Silhouette just released new single Running Against the Wall which made various radio
playlists throughout Ireland and just released the new video following huge success on
her last single Cant Keep Up (used as the soundtrack to the NI tourist board advertising
campaign) which video has over 71,000 views!
Silhouette is getting bigger and better!