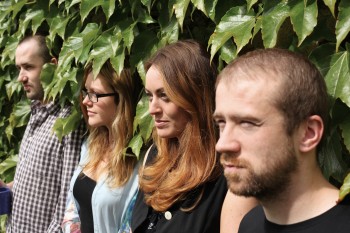 “Her spectacularly limber voice is just the start ¢ Miss O possesses a keen ear for a summery refrain…. Throw in a heart-stopping live show and weÆve got everything we look for in an Irish rose.” – Celine Murphy, Hot Press ‘Ones to watch 2012′

ōR¾isĒn OÆs vocal is pristine in clarity with the distinctiveness of her accent curling around the ends of her lyrics. However by the end of the track she has let rip into a Florence-esque roar. æHere We GoÆ is every bit the catchy tune that makes you feel excited about life, itÆs no wonder that the single was dreamt up by the singer-songwriter following a weekend at Electric Picnic. This is one you can look forward to dancing and singing along toö.- musicscene.ie

ōæHere We GoÆ, the ballsy lead single from her forthcoming debut album. With Grammy-winning producer Dave Odlum pressing all the important buttons, Ms. O has come up with a stirring, confident piece of folk pop that instantly brings to mind the event which inspired it ¢ none other than our very own Electric Picnic.Æ Hot Press review (31 May, 2012)

Dublin-born R¾isĒn O is one of the most promising new artists to emerge from the competitive Irish music scene in recent times. In a relatively short timespan she has shared stage and studio space with some of IrelandÆs leading artists, and proved that combining a collaborative songwriting style, the warmth and depth of her expressive voice, a hot band and a commitment to hard work is still the best way to progress. 23-year-old R¾isĒn OÆs career took off almost immediately after she left school. She started airing her own songs at every chance she got, whether as a solo artist, a guest performer or with her band. Her song æDriftingÆ was singled out for special praise when it appeared on the WomanÆs Heart Then And Now album in 2010, and where it shone in the company of such illustrious contemporary Irish female artists as Lisa Hannigan, Wallis Bird, Gemma Hayes, Heathers and Julie Feeney. She was further encouraged by the response from the music media and fans alike when she released the EP The Thrill in 2011. The positive reaction to the EP was reinforced by the release of her debut single æHere We GoÆ in May 2012. The song was inspired by the Electric Picnic, and it was selected by Ian Dempsey as his song of the week on Today FM among other fine reviews. Its video also scored an

impressive number of YouTube hits, and the singleÆs overall impact placed R¾isĒn O firmly at the forefront of emerging talent in Ireland. Support slots with artists across a wide range of styles, including Imelda May, The Coronas, Mary Black, and Brad Paisley, proved that R¾isĒn O was born to perform. She guested on recordings with Paul Brady and Mary Black and her nationwide fan-base grew when she was invited to perform live on the Pat Kenny Show on RTE 1 and Ireland AM on TV3. Last year she was proclaimed by Hot Press as ōOne To Watchö for 2012, and has already justified that prophecy. R¾isĒn OÆs debut album The Secret Life of Blue is out now. As work on the album progressed it became clear that it was developing into a collaborative effort involving the rest of her band, rather than a purely solo work. As a result, the name R¾isĒn O now encompasses the band as well as the lead singer. The Secret Life of Blue was recorded in the Studio Black Box in France with Grammy Award-winning producer David Odlum, and as R¾isĒn herself explains, ōAfter rehearsing and writing together for so long, we knew there was pressure on us to get the album out so people could hear all the new songs, but we didnÆt want to fall into the trap of rushing headlong into it. David has a terrific reputation and has worked with The Frames, Gemma Hayes, Josh Ritter and lots of others, so his advice was invaluable in helping me and the band realise our musical vision for the album.ö The impressive collection of literate and melodic original songs on The Secret Life of Blue develop from creative collaborations with band members Alan Tully (guitars and vocals), Brian Murphy (bass and vocals) and Ruth OÆMahony Brady (keyboards and vocals) who also provide a cohesive setting for R¾isĒn OÆs beguiling vocals. Tracks range from the achingly wistful æHold OnÆ to the lilting æSynchronicityÆ, while thereÆs a brooding atmosphere and an appealing musical inventiveness to æFilled With SnowÆ. It also contains the second single æHow LongÆ which is released to coincide with the album. That single also stretches beyond the parameters of folk-pop to encompass elements of Afrobeat. It has an infectious rhythmic pulse, and contains one of R¾isĒn OÆs strongest vocal performances to date. Its release is also supported by a fine video directed and edited by band member Alan Joseph Tully.

Body&Soul area. So this is a good time to be Roisin O. As is obvious from the album and the frontwomanÆs on-stage confidence, she is very much her own woman, a fact that is underscored by the way she modestly downplays the musical family from which she sprang. ōIÆm proud of my musical roots but IÆm equally determined to be judged for the quality of what we write and perform and the appeal it has to our own audience,ö she says.

R¾isĒn OÆs profile is growing faster than ever, with performances on RT╔Æs The Late Late Show (Sep 14) & TV3?s Ireland AM (Sep 17), the band played for well over 1 million people in just over 4 days. Their second single æHow LongÆ has also received numerous plays from IrelandÆs top radio DJs, including Ian Dempsey & Ronan Collins. The inventive video for æHow LongÆ continues to attract attention too, with the lead actor/puppet becoming a star in his own right, and making it well worth a look.

Their debut album æThe Secret Life Of BlueÆ is available now from from HMV, Tower Records, Golden Discs, Celtic Note, and iTunes. The band celebrated the release with an album launch to a packed WhelanÆs on 21st September, and are now preparing to embark on their first ever Irish tour. The tour will consist of four dates: