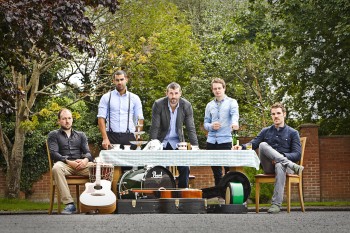 Hermitage Green formed in July 2010 in a locked back room of the Curragower bar, Limerick. What started out as a spontaneous jam session between friends, soon developed in to a strong acoustic outfit with an original sound, for which the band have credited their contrasting musical tastes. These interests range from traditional Irish and folk music to metal- and have formed the basis of an entirely unique approach in how the band deliver their material. In just two years the band have managed to secure supporting slots with The Saw Doctors, Sharon Shannon and The Stunning- aswell as tour dates which took them to France, the U.S. and the United Arab Emirates. The Autumn of 2012 will see the release of their long awaited EP.

Some relevant Information on the band:

-Hermitage Green have spent the past few weeks touring the country launching their debut EP ‘The Gathering’ -The EP is available on iTunes and featured at number one for a number of days. Following this the Gathering stayed at number 2 in the iTunes album charts (just behind Mumford and Sons) for ten days straight. -The band just shot a video for their upcoming single Golden Rule in Coachford Cork, this will be released online and to radio stations in the coming weeks. The band will then embark on a radio tour with this single

-Now is your time to catch the boys as the next few months sees them touring Australia, America and Europe.