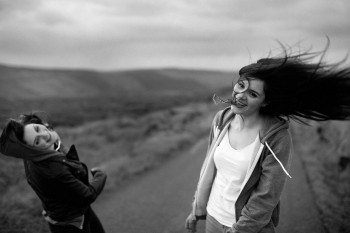 2012 promises to be a big year for Ellie and Louise MacNamara aka Heathers, having just finished recording their second album with producer Max Dingel (White Lies) and recently signing a global deal with Universal Music Publishing UK.

The first single from that 2nd album ľ titled ĹForget Me Knotsĺ ľ is to be released through Warner Music Ireland on Friday June 22nd, with the album ĹKingdomĺ set to follow on Friday September 7th. Most exciting for Irish fans is that the girls are also announcing their first Irish tour dates in over 12 months. In September they will play headline shows in Dublin, Belfast, Cork, Galway and Limerick, as well as more dates soon to be announced. They are also delighted to be invited back to play Electric Picnic after their amazing Main Stage slot in 2010.

Their debut album ĹHere, Not ThereĹgarnered widespread acclaim internationally amongst both fans and media alike for its unique melodic hooks and extraordinary vocals. The album achieved Gold sales status in Ireland and received a further boost when they had the lead single ĹRemember Whenĺ used on a major Discover Ireland TV and Radio ad campaign. The track in question was dubbed the ôsoundtrack to the Irish summerö.

The success of that debut album resulted in two summer length tours in the USA, which developed into further invites to perform at CMJ festival in New York, Canadian Music Week in Toronto, as well as European festivals such as Eurosonic, The Great Escape, Camden Crawl, Oxygen and Belsonic. Most recently they played as part of HMV UKĺs Next Big Thing, and performed two brilliantly-received shows at Camden Crawl Festival in addition to a sell-out headline show at Londonĺs Barfly in May.