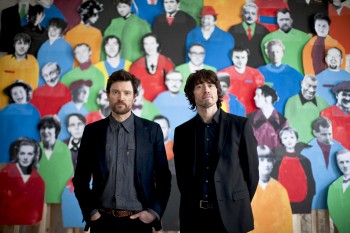 One of Ireland’s most respected and successful bands, The Walls were formed by brothers Steve and Joe Wall after the demise of their legendary, multi-platinum band The Stunning. They started their own record label Dirtbird Records and released their first album Hi-Lo in 2000. It went Gold in Ireland on the back of good airplay and a helping hand from U2 who added them to their second, legendary, Slane Castle show after the band sent them the cd. The follow-up album New Dawn Breaking went Top 5 and was amongst the top selling home releases of 2005. It includes the classic To the Bright and Shining Sun, containing that infectious guitar riff which helped The Walls become a household name when it was used on a major TV commercial. Other major acts The Walls have graced the stage with include, Bob Dylan, Crowded House and Red Hot Chilli Peppers.

In March 2006 they went to the United States where they played to packed houses in New York, LA and Austin Texas as part of the SXSW Music festival and they were invited by Nic Harcourt to perform a session on his legendary “Morning Becomes Eclectic” show on KCRW.

Over the following two years the band played in France, the Czech Republic, Slovakia, Austria and undertook their first ever trip to Australia where Crowded House offered them lucrative support slots on their massive re-union gigs in Sydney and Melbourne in 2007.

By this time some babies had arrived in The Walls camp and domestic duties came a-calling. The band took some time out from touring and between nappy-changes they built their own recording studio in Dublin. In 2007 they retreated into the darkness to work on album number three. Steve and Joe took a break from recording to work on a revolutionary new two-man audio-visual show that they devised. It took two years to perfect and took people by surprise when they performed a set of new songs at the SXSW Music Festival in Austin, Texas in March of that year.

In June 2010 they released a double A-sided single “Carrying the Fire” and “Phantom Power”, with both sides doing well on Irish Radio. A four-track EP “Bird in a Cage” was released in summer 2011, containing two tracks from the album and two previously unreleased songs. Bird in a Cage received heavy rotation on radio stations in the north and south of Ireland.

The forthcoming third album “Stop the Lights” took six years to complete and is due to be released in March 2012 .The single of the title track being released on Feb 3rd.